My One Second of Fame 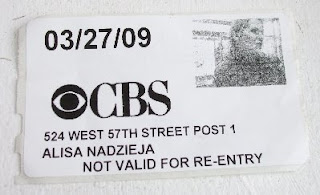 I had my one second of fame today! I was hoping for the 15 minutes promised by Andy Warhol but I can't complain.
On March 27th I got a call from a producer of CBS Sunday Morning News letting me know that they are doing a feature on America's handmade economy and want to feature some of my bags on the set. I was quite excited. I dropped off some of my handbags at the studio that day. Posted above is my security entrance card. My first name is spelled wrong and my head is turned to the side because the producer asked me a question just as the security guard was taking the photo. I was allowed in the building with my profile shot so all was well.
The CBS feature was broadcast nationally today. I was not at home and only had access to a small portable black and white TV with so so reception. Yes, rabbit ears. In the opening shot, CBS Sunday Morning News anchor Charles Osgood points to my handbags for about a second. he he  But I am still honored that they chose my bags from the thousands on Etsy.com!
Watch the CBS feature on America's handmade economy on YouTube here.

Mitsy / ArtMind said…
You should be proud! It's true that they did choose your bags even though it only got featured one second perhaps. Must have been very exciting! :)
March 30, 2009 at 12:58 AM

StaroftheEast said…
Congrats on the feature! Little drops can become a lake, so they say here in Turkey, so even if it is a second, it eventually will pay off :)
March 30, 2009 at 12:51 PM

Pesky Cat Designs said…
Thank you everyone for all your encouraging words. They mean a lot!
April 1, 2009 at 8:52 PM

Popular posts from this blog

May 02, 2020
Everything in my shop is now 20% OFF and includes free shipping!
Post a Comment
Read more

June 02, 2010
Katzenhohle by Dornroeschen Filzunikate I recently came across this incredible cat bed made by German artist Dornroeschen Filzunikate. This beautiful piece of functional art called a Katzenhohle , cat cave, is handmade of felted wool. It's definitely the most unique cat bed I have ever seen. It would bring a bit of nature into my urban NYC home. I think my Anni would love a cat cave although her favorite spots right now are the pillow behind my head in bed, a straw basket that was meant to store magazines and a storage box made from fabric that becomes a hammock when she sleeps in it. My sweet Anni FOX 5 Update : A while back I wrote a post about a story that Fox 5 news was doing on Etsy and the handmade market. I was interviewed in my studio as part of the feature. An Etsy press agent recently informed me that the story aired April 15th and he also missed it. He said he is trying to get a copy of it from the studio. I'll be sure to post a link to it when it becomes ava
19 comments
Read more

December 27, 2019
Wishing you all the best in the New Year! May it bring you much happiness. Hugs to you all!
Post a Comment
Read more
SHOP ONLINE 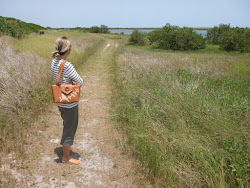 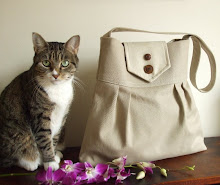 Anni the sweetie who inspired the name of my shop.

Click here to give the value of 0.6 bowls of food to rescued animals. No donation/money is required.